I think the latter.

I was talking to my mom tonight, and the conversation went something like this -
{my mom is a very wise woman, and I value what she says so much}

Me: It's not that I WANT to be in a high position in the church, I just don't think I'd ever be able to be called to one, 'cause people would say something like, "Oh, the second-counselor in the General Young Women's presidency had a baby out of wedlock, she's not a good example to young women."
My Awesome Mom: Or, they'd more likely say, "Wow, what a great example! She made a mistake, but made a selfless, righteous choice in placing her baby for adoption and strengthening her testimony in the process."  You could help a lot of girls who feel lost.
{insert warm fuzzy feelings here}
I love my mom. Walking down the street, nobody would be able to look at her and know that she was divorced, widowed, had a son go off the deep end, and a daughter have a child out of wedlock. Nowhere on her does she wear a scarlet letter. Instead, I'm pretty convinced that she secretly has a Superwoman symbol underneath her shirt. 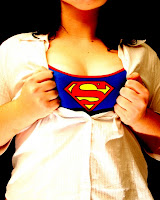