it's something unpredictable, but in the end it's right

February 20, 2010. My phone buzzed under my pillow, and "Blessed" by Elton John began to play. It was 6:15 am, and I woke up feeling numb. I showered, twisting to see my beautiful toenails I'd had my sister paint two nights earlier and thought, "Well, at least my toes will be pretty."

My bag had been packed for over a week and hauled around in the back of my mother's car on the off-chance I went into labor while at the University of Utah hospital (that's another story...). I pulled my hair into a messy-bun, dressed warm, and got into the car at 6:40. I called Ben, told him to be on his way down (he had an hour drive) and I arrived at the hospital at 7:00.

To say I don't remember much would be a lie. I remember counting the black tiles in the emergency room check-in (because the main doors weren't open that early). I remember filling out way too much paperwork, not asking enough questions, and silently wishing I hadn't decided to be induced, after all. After almost an hour, I was in a delivery room and the sweet nurse hooked up the contraction monitor, baby heart-rate monitor, and started the pitocin. I settled in and began joking with my mom. By 9 am, Ben had arrived with a large bottle of chocolate milk (which I wasn't allowed to drink) and two bags of Lindt chocolates (which I also wasn't allowed to eat). It was so slow. So agonizingly slow.

We listened to music, played games, and talked. I would stare at the heart-rate monitor and try to imagine the tiny little heart beating in my womb, just hours from entering this world. I was so afraid to meet him. I was so afraid to love him. But I already knew that I did.

David and Amy were on the first leg of their flight to Utah, and I anticipated them arriving well after their little one was born. In those first few hours, I decided I wanted them to come to the hospital. Not part of the original plan, but so far NOTHING had gone according to MY plan.

A little after noon, even though I was breathing through my contractions, I was talked into the epidural. Within 30 minutes, I began to experience a panic attack as I felt my body go numb. By 1 pm, the epidural had been stopped. For me, the pain was preferable to being numb. Each contraction hit me like a wave of reality, each more intense than the last and reminding me that I was part of something greater than myself.

At 5:31 pm, David Allen Harmon III entered this mortal existence. It was the most sacred experience of my life. 8 pounds, 2 ounces. 20 1/2 inches long. A bundle of swollen, puffy, sticky perfection. I did not get to hold him immediately as I'd hoped, but Ben's blessed mother took pictures for me. When I did hold him, every fear I had melted away. He was tiny in my arms. I felt like I was in a cloud amidst all the noise and distraction around me. It was just the two of us. I knew in that moment that I would do anything for this little boy. I knew that I was about to do everything I was capable of doing. I cried from exhaustion, sadness, joy, and every emotion in-between.

Amy and I had decided to breastfeed. I would start in the hospital, and Amy would do a hormone-induced pregnancy to induce lactation. I had such a strong desire to breastfeed, and Amy's desire to had solidified my decision. As I learned to nurse David, my love for him increased. How incredible it was that I was the only person who could do this for him? He was relying on me, solely. I was his protector and provider. I was his mom for a small time, and I would make those moments last. Nursing him was such a beautiful and incredible experience. I will never regret that decision.

I called David and Amy. Their son was here!  He was perfect!  Would they come that night? Of course I wanted them to! They would call when they got to Utah. I got off the phone and cried again.

My dad came to meet little David. Ben's family met him. Then, Ben and I were alone with our son. It was heaven. I held him, rocked him, nursed him, sang to him, and told him stories. I told him everything I wanted for him. I made him promises that I have kept so far. I memorized his face, his hands, his little feet. I memorized the sounds he made while he slept. I memorized his little whimper, and I memorized his huge, beautiful eyes.

Exhaustion caught up to me, and I asked David and Amy to wait until the next day to come. They gladly agreed. (As I've said, they are amazing). As midnight rolled around, I kissed my sweet little angel on the forehead and breathed in his scent. As my tears fell on his sweet face, I promised I would make him proud of me.

He is perfect. As with my whole story, that day was perfect in its imperfection. With the existence of this perfect little boy ended my old life, and began a new life. Here was my second chance at life, by giving him the best first chance I could give him. 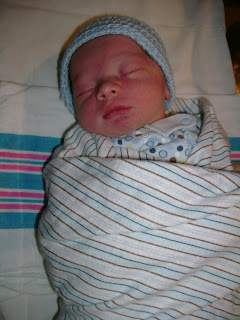 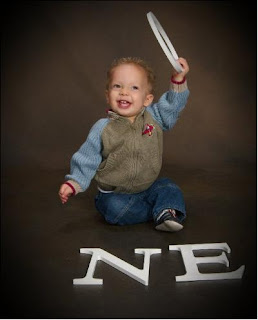 Happy Birthday, sweet one!
Posted by Sterling Bo at 11:06 PM