Before all of this, I viewed adoption as chance - adopting couples were randomly matched up with children, and somehow it worked. Since then, I've developed a testimony of God's hand in adoption. Especially mine.
In August 2009, I was still in denial and determined that I wasn't going to place my baby for adoption. I had the mindset that I was plenty old enough to be a mother (especially living in Utah, where girls two years younger than me were already married and starting families) and that I needed to take responsibility for my actions. Funny how looking back now, I can tell I was definitely influenced by the world in that thought. Anyway, somehow I was drawn to the It's About Love website, and I started looking through adopting parent profiles.

First, I just searched ten random families at a time. My reasons for not liking the families were varied and sometimes, as ashamed as I am to admit, shallow. One family had too many kids and I thought they were being selfish. One family lived too far away, in Maine (ironic, I know...). One couple was too short, one couple was too tall. This one didn't mention anything about music, this one says they "aren't animal people". I even said one couple wasn't good-looking enough - and I feel terrible now.

Then I discovered the coolest thing in the world - search preferences. I could put in interests I wanted the couple/family to have, how many kids, pets, location, and what kind of contact they wanted with a birthmom. I changed my preferences a couple of times to perfect them. I found three couples that was interested in, and I decided to e-mail them to just ask questions. The first family I changed my mind about because they already had two biological children and, at the time, I was nervous that an adopted child might feel ostracized. Since then, I have seen that it's not true. But it at least put my list down to two couples. I e-mailed one set first, and got a reply that they were "on hold" by another birthmom, but they would love to talk to me. I felt like I was imposing on someone else's territory, so I actually never e-mailed them back. The third couple I e-mailed and received the kindest reply. Their profile had caught my attention because they were beautiful, they had a dog, were both very musical, and they had conflicting information about where they lived. So being nosy, I asked if they lived in Utah or in Florida. It turned out they had lived in Utah until a few months earlier, and had moved to Florida to attend law school. My initial reaction was, "Well, they live in Florida, that's way too far away," but after the second e-mail I decided it would be good for me to at least get to know them because, after all, it may be nice to see things from the other side.

That couple was Dave and Amy. We e-mailed often, and for months I anxiously checked my e-mail for their replies. After getting cold feet about telling them once, then deciding I wanted to meet them first, and instantly loving them when we did meet, I announced to them on Christmas Eve that I wanted them to be my baby's parents. I sent them a box with a blanket my mom had made, the "Our Miracle" willowtree statue, a little fleecy sleeper, and a CD I recorded of me singing 'From God's Arms to My Arms to Yours'. ( Click Here  to view the video I made with the song I recorded). Christmas eve and Christmas day there were many tears shed - but I knew they were meant to be my couple. Sometimes there are coincidences, but in my case there were confirmations.

~ Within the first couple of e-mails, I learned that Dave and Amy had known and worked with my sister and brother-in-law back in 2002. I immediately called my brother-in-law and asked what he thought about them, and he told me they were amazing people.

~ I had been an RA for USU housing in Logan the school year before I got pregnant. Dave worked for USU Housing I.T. and had worked with my boss and had often fixed computer I used daily. He even remembered talking to me once about my name, and how unusual it was for a girl to be named Sterling.

(It gets better now)

~ When Ben and I first met Dave and Amy, we went to dinner with them at Chili's. They were in Utah for Thanksgiving visiting their families. We met them at the restaurant, and they were already there when Ben and I walked in. They stood, and as we said hello and embraced, I can honestly say I felt as if I had known them for years. They were so familiar to me. And, as we sat and talked, I had the strangest feeling come over me as I looked at Amy. I saw myself placing a child in her arms. I felt a lump in my throat as I realized this was it. The confirmation I had been praying for. God had given me a glimpse of how right it would feel. I was grateful, but that was when my grieving process began. It was also when my healing process began.

~ In November, I met a birthmother who had breastfed her little girl while in the hospital. I've always believed in breastfeeding, and I wondered if that was something I was strong enough to do. Nursing bonds a mother and child, and I knew I would have a harder time letting him go if I did. I finally concluded that although nursing is healthier for the baby, it would be useless because he would go straight to a bottle afterward. Then, a few days after New Years, I got an e-mail from Amy. I could tell she was nervous writing it, but she asked how I felt about her breastfeeding my little boy. She said she had started a hormone induced pregnancy so that she could lactate, but knew that it is difficult for adoptive mothers to breastfeed if the baby has already been started on a bottle... and wondered how I felt about nursing our son in the hospital. I cried when I read that e-mail, because I had wanted so badly to nurse my baby. Now, here Amy was asking me to nurse him so that she could experience that part of being a mother, too. She wanted to be a mother in every way possible to my little boy, and I was overwhelmed with the love I felt for her. We agreed that nursing would be the best for David, and I knew that Heavenly Father was giving me the chance to experience something worthwhile. I was also grateful because I knew that if Amy nursed, he would bond more quickly with her. She is his mother, after all.

~ Two weeks before I was due, I had a support meeting with some of the members of my family, Ben and his family. I told everyone why I was placing, what my plan was for the hospital and placement, and Ben and I were able to feel the love our families had for us. It was the first time that Ben's parents had heard Dave and Amy's last name, and Ben's mom mentioned that her mother's maiden name was Harmon. When I heard that, I jumped on the New Family Search website and started tracing Ben's family back, and Dave's family back. Incredibly, Ben and Dave are third cousins. They have the same great-great-grandfather. That meant that little David would still be in that family, and would be in the same sealing line. That little bit of information was a confirmation to me, but more importantly it was a comfort to Ben's family.

I didn't just "happen" upon Dave and Amy. I was directed to them. I feel like she's my sister, and that I've known her and Dave forever. I have faith that somehow, we'll all be connected in the eternities. I know that I'll be with my immediate family but, as far as I'm concerned, they are part of my family, too. Although he won't be sealed to me directly, I know that it's possible for me to still be connected to my little boy and his parents forever. I have faith in God's love for me. He knows the desires of my heart, and tells us that families can be together forever. 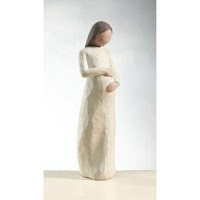 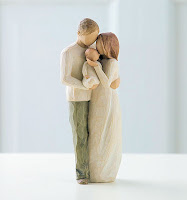