adoption triad, supporters, and others unite - for Paigey

*Update* (12:30 am)
It's not as bad as they initially thought, and Paige's thumb (which they believed was shattered) will be able to heal. Her leg and arm will be fine, and incredibly there is no brain damage. It will be a long recovery, but as of right now it's not believed there is any internal damage.

*how it happened* they were traveling 85 mph in Provo Canyon, and as they were passing a car, the bike hit head-on into another car. The driver of the motorcycle hit the windshield, and Paige hit the cement barrier. Please pray for her friend (and his family) too, as he was flown to the U of U.


I think I may be the only person who calls her Paigey and not Paiger.

Paige is one of those girls that you meet, fall in love with instantly, and will never forget.

She is, also, a birthmom. (which makes her even more incredible).

August 24, 2010 at 3:30 pm, Paige was involved in a very serious motorcycle accident in/near Provo canyon. She was on the back of the motorcycle, neither of them were wearing helmets. Her left arm and leg were broken, and she has been in surgery all evening. I'm still waiting for updates (from her daughter's parents, who are some of my favorite people EVER) but will post as I know more.

Paige placed her beautiful daughter, Andi, with her forever family in October 2009. I met her three months prior to that, and she quickly became my best friend and an incredible strength for me. After pushing through one of the most difficult single-and-pregnant situations I've ever seen, she came out on top. With only weeks left until she was due, she drew all the strength she had and decided to give her little girl a family - with a mom and a dad. When she met Andi's parents, there seemed to be a new glow about her. Even though she ached and mourned, never once did she utter an unkind word. She loves her little girl so much, and has been striving to live a life her little girl can be proud of. She sacrificed her whole heart to give her little girl the world - including pulling herself out of an unhealthy and dangerous relationship. After her placement, she continued to be a support to the rest of us girls in our group. She cried with us, laughed with us, and helped prepare me for placement and post-placement - including taking me out to dinner and a movie a few days after I placed, and sitting with me for hours to talk about what to expect at the blessing and sealing. Paige is one of the most beautiful girls I've ever met, and she is so loved. 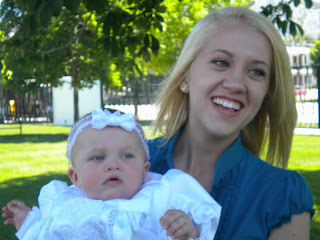 Paige with Andi when she was sealed to Kim and Shane. Such a beautiful day!
I know she can pull through this. She's strong, young, and healthy. Please pray for her, and for her family. The power of prayer is incredible, and it can produce miracles.
Posted by Sterling Bo at 10:46 PM